I started in that beautiful Spessart-village of Heimbuchenthal and I had to climb up pretty fast to about 400 m of altitude. Then the walk took me step-by-step down until I left the Spessart and reached the Main Valley.

This part of the foresty middle mountains (“Mittelgebirge”) seemed much more populated than what I experienced the day before. Very often I met other hiking or mountain-biking people.

It was interesting to follow marker stones that identified old borders and some of them dated as far back as the 17th century. It feels good to be allowed to cross borders safely, easily and free of charge nowadays. At one point, I came to the Dreimärker, where three territories met.

Further down on the way, I came to a saddle point, where my route crossed on the top of the saddle and to the left and to the right, there were both old paths down the hill towards towns down there. In the middle of that spot, there was an old oak tree (in German “Eiche”) which is called Frühstückseiche (Breakfast Oak) because apparently in the past lots of hikers would have they are breakfast in its shadow.

Stepping out of the forest was a shift of worlds into a very flat open landscape with apple trees. I followed mostly on small paths into the city off Aschaffenburg and crossed the Main there.

My highlights of the day were:

In the morning, it was raining. One of the very few days, where I got some water from above. My first steps were through the city down to the river called Main, which is the border between Bavaria and Baden-Württemberg in this region.

The Spessart is one of the central European “Mittelgebirge” (medium sized mountains) and it is covered with what seems to be one enormous forest.

Sometimes I walked on beautifully designed gravel paths and sometimes it was right through the woods. Sometimes it fell steep to one side and rose high to the other, sometimes the landscape was softer.

Quite some time, I followed along streams or rivers (Kropfbach, Dammbach and others) and in the course of the day, I saw more deer than people.

I was amazed how far away I felt from towns, cities or traffic during those hours in the forest.

At the end of the day, I stopped by the Schloss Mespelbrunn, a medieval castle that is very beautifully placed in the scenery. The Spessart has this reputation, that back in the old days people had to be afraid of bandits in the forest. It is perfectly imaginable how to block one of the paths for a carriage to be trapped and some places seemed designed like in fairy tales. So, I can fully understand how those stories could develop.

My highlights of the day were:

The weather had cleared over night and in the morning it was sunny and around 15° when I started walking from my parents‘ house in Pasing.

It was interesting to walk the paths of my childhood packed with a big backpack and dressed like a wanderer. Mostly on concrete roads I came through Westkreuz and Aubing and walked along the train tracks towards Puchheim.

At one point, the whole path was still under water and when jumping too short at some paddles, I was positively surprised by the water-repellent characteristics of my hiking pants. 😎

Around Munich, the landscape is fairly flat and so I only had one little elevation to overcome before Fürstenfeldbruck. I left the town towards the Pucher Meer (Ocean of Puch) and it felt a little out of place to walk with my „luggage“ along this pond where people came to swim.

Finally, I reached Mammendorf, the terminal stop of the Munich suburban train system and went one town further west to Hattenhofen to stay at a very comfortable, very Upper-Bavaria-typical hotel.

My highlights of the day:

My tour, of course, is a big project. So, I needed to get inspired by other big projects.

Since the Tour de France usually doesn’t start with a regular full day, I didn’t want to do that either.

So, the prologue went from my home to my parents’ house about 8km east.It was raining a lot that day and so I get to try the impermeability off my clothing and gear. All worked well and I arrived there safely.

The highlights of the stage were:

Wacky-Walking: by foot from Munich towards Frankfurt

When I was talking about my summer vacation plans, I got two reactions: some people thought that this was mainstream nowadays and a fully trending activity, some people told me, that this seems like a crazy idea and who would ever think of an activity like that.

To me, getting both of those reactions to the same idea, seems like an indication of quality. 😉

Since we have a family gathering close to Frankfurt at the end of August, I decided to walk there from Munich.

I will take you guys on my tour and blog here about the individual milestones and about general reflections I have while walking.

It is important to me to note, that: View of the park and the skyscrapers Meeting Rotarians everywhere – the same ideals bring us together 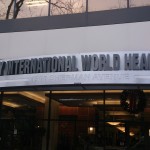 Outside the building. This is the Rotary International World Headquarter or short „One Rotary Center“ 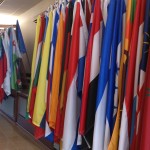 When you exit the elevator on the 18th floor, you see all the flags of countries and territories where Rotary International has a club. 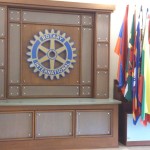 In the middle of all the flags, you find the Rotary wheel. 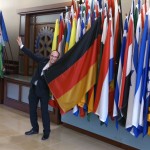 …and I found the German flag. 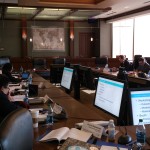 This is the boardroom where our meeting was held. 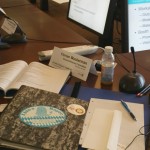 My little part of the table and all the documents to use and consider. 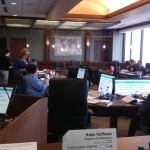 A view into the room from the back, where the was place where the Rotary Internationl staff members could support us with comments, presentations and insight 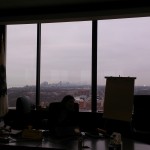 This was the view out of the window from the meeting room. In the mist, there is the skyline of Chicago.

Sometimes we get the chance to get a glimpse of what the world is like in those areas where the big decisions are made. During this Rotarian year 2014/15, I have the great honor to serve on the Rotaract/Interact-Committee of Rotary International. It comprises 11 people from around the world and in order to discuss our different points more effectively, we had one meeting in person where we all came to the Rotary International headquarters in Evanston, USA.

The meeting took place on the highest floor of the building (floor 18) in the „Board Room“. It’s a large room where you find in the middle a table in the shape of an elliptical ring. In the middle of the ring, there are huge screens where the presentation slides are shown. In front of your seat, you find a small microphone. It may be helpful for people who speak very low, but it is crucial for the interpreters. On one side of the room, there are several booths for the interpreter. They can see into the room without being seen themselves and they will only hear what you say when the microphone is switched on.
It is fascinating how well the discussion worked being effectively held in 3 languages: English, Japanese and Spanish.

As participants, we came from 5 different continents, all different walks of life and with different backgrounds. It was fascinating to see how well we could work on all the topics and discuss our different viewpoints – always in an atmosphere trying to find a consensus.
In the future, I will certainly look differently at pictures from diplomatic meetings – having experienced what it feels like to work in such a setting. Once again, I’m off to the US. It’s my first meeting with the Rotaract-Interact Committee and we have plenty of very interesting topics. So my first destination is Chicago and more precisely Evanston, the headquarters of Rotary International.
Afterwards, I have the chance to go back to Detroit and see my families. Great times ahead!

This little island just off the Australian coast is so beautiful. It’s circle shaped and lying without any close neighbors at the southern end of the Great Barrier Reef forming the endpoint of the Reef. It has been mined for guano, which is basically bird poo, in the late 19th century. Back then, all but 10 trees have been cut down and 1 meter of dirt has been taken from the entire island. It was sold as fertilizer and as an ingredient for gun powder. The whole island was stripped from most of its vegetation.

The only people who lived constantly on the island where the lighthouse keeper and his family. Eventually an Australian convinced the government to take tourists on the island and he regrew plants and trees. We learned about the Pisonia trees who are original to the island and the Casuarina trees who refertilize the soil and stabilize its surroundings. Besides, we saw the impressive Pandarum tree that just grows new roots every now and then. It sometimes looks as if a didgeridoo has been put underneath a horizontal branch to support it.

Then you find interesting birds on the island. Some of them (the White-Capped Noddy) have the nice habit of pooping all over making it just a question of time until you’d be hit. We learned that it apparently brings good luck…we still wait for what great things will have to happen now. Since there are no usual land-bound animals, the birds have no real predator. So they can sit, walk and nest on the ground.

The coral around the island has grown over thousands of years and there are beautiful fish around. We’ve seen whales breach and flap their tales, we swam with sharks, we floated alongside turtles and had a school of big eye travelleys beneath us. The wildlife is beautiful! It’s amazing! It’s breathtaking!